The Accountant of Auschwitz

THEO MERTEN-MANCER reviews The Accountant of Auschwitz, a documentary about the recent trial of Oskar Gröning, a surviving member of the SS.

A study released on Holocaust Remembrance Day this year found that two thirds of American millennials are unaware of what the Auschwitz extermination camp was. Survivors in their late 70s or older may remember experiencing the Second World War as children, however it seems that details of the conflict and surrounding events are fading from living memory. Matthew Shoychet’s new documentary serves as a contemporary reminder of the dreadful atrocities committed in the concentration camps of World War Two. Beyond this, The Accountant of Auschwitz explores crucial questions of justice and accountability.

The documentary revolves around the 2015 trial of Oskar Gröning, a 94-year-old former SS officer who was charged as an accessory to the murder of over 300,000 victims in Auschwitz. His defence is one of moral disengagement: he claims to have been a mere ‘Bookkeeper’, a ‘cog in the machine’. He believes that his lack of direct participation in the killings absolves him of any responsibility. Both sides of the trial are explored in the film, not least on the issue of Gröning’s age. ‘Are we even prosecuting the same person who committed the crime?’, asks a lawyer from the US department of justice. Gröning himself seems quite aware of the horrific consequences of Nazi ideology, and even goes out of his way to challenge the Holocaust deniers gathered outside the courthouse. ‘I was there’, he tells them, ‘one and a half million Jews died at Auschwitz’. Despite this, even as a frail old man, he seems somewhat arrogant, cold, and indifferent when recounting the acts of violence that he facilitated. Through an objective lens, Shoychet presents the complex contradictions in Gröning’s character and the ensuing moral conflicts that emerged during the trial. He does this surprisingly well despite the absence of any direct interview with Gröning (perhaps intentionally so) and of footage of the trial itself. The director opts instead for interviews with survivors and lawyers, supplemented by excerpts of legal transcripts and news commentary. 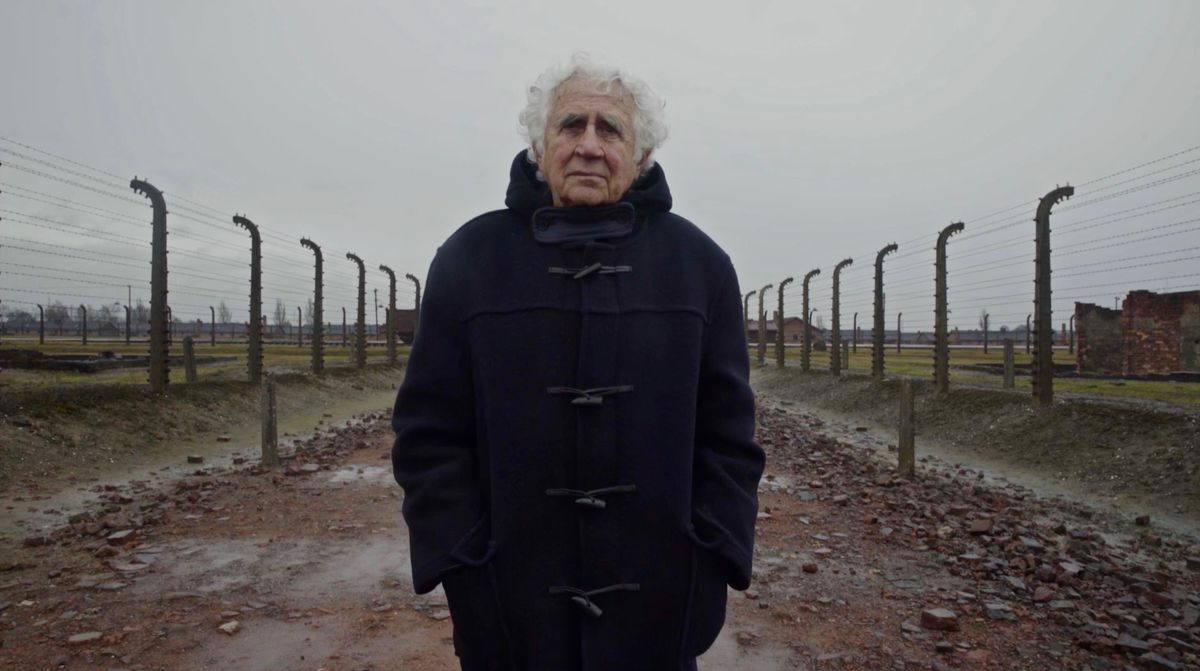 Bill Glied, a survivor of Auschwitz, visits the camp during his interview for the documentary. Image source: theglobeandmail.com.

Set against Gröning’s attempted detachment from the Holocaust are the voices of three survivors, travelling to the courthouse to give testimonies of their experiences. Hedy Bohm, sent to Auschwitz as a child, recounts with great emotion her incessant suffering after losing her mother and sister at the camp, bringing even more of a sobering and individual weight to the issues discussed in the trial. Indeed, debating the relevance of crimes committed 70 years ago seems somewhat unscrupulous when presented alongside the ongoing suffering of survivors. The documentary connects Gröning’s actions and others at Auschwitz to the present day through a tangible emotional narrative. Both powerful and subtle, it avoids any dramatisation of the events.

The issue of Gröning’s age is further challenged by Benjamin Ferencz, a veteran of the Normandy Landings who later served as the chief prosecutor for the U.S. Army at the Nuremberg trials. Having just entered his 98th year, Ferencz explains that ‘no one is too old to be punished’. He goes on to recount – with vivid clarity – his experience prosecuting former SS officers following the war. Shoychet uses these memories to further explore the failings of the German legal system, using neatly inserted news clips and interviews. Of the 800,000 SS officers active during the war, only 124 were ever handed a sentence, and even fewer ever saw the inside of a cell. A present-day German prosecutor explains how the Nuremberg trials, corrupt with Nazi judges and lawyers, allowed hundreds of thousands to live freely despite the actions they had taken part in. He explains that the 1998 Rome Statute changed the law on individual accountability in genocide cases, leading to a new race against time to bring charges against ageing former Nazis whilst they were still alive – hence the trial of Gröning. This diversion from the trial to the wider issue of post-war justice is a welcome one, although the proceedings of the courtroom take a backseat in the second half of the film. More details on Gröning’s particular case could have been included to further illustrate the application of these new laws.

Despite its short length, The Accountant of Auschwitz explores the issue of personal accountability with depth, thoughtfully combining historical accounts and philosophical debate to form a deeply engaging and challenging film. Interestingly, this film comes at the same time as others focused on the same subject matter, such as Christ Weitz’ Operation Finale. Today, as we witness a resurgence of populist politics and right-wing ideology, remembering stories like that of Oskar Gröning is perhaps more pertinent than ever.