The Courtauld Gallery’s retrospective of Peter Lanyon’s work is the first exhibition entirely devoted to the artist’s ‘gliding paintings’, which are, primarily, explorations of the Cornish landscape he made throughout the late fifties and early sixties. In taking to the air, Lanyon pioneered a new way of depicting landscapes, understanding and portraying those of Cornwall to an unprecedented extent. By using this innovative perspective, Lanyon explores the invisible characteristics of both the air and land.

When confronted with his paintings it is tempting to view them as fundamentally abstract; however, upon closer inspection, and with an imaginative leap, it is possible to see them rooted in the figurative landscape, rather than the purely abstract sensation of flight. His skill in yoking the abstract and the figurative together is what makes his images so intriguing; the viewer is encouraged to discern the multiple perspectives that are offered, as well as the topographical attributes of the landscapes. In doing so the observer becomes actively engaged with the painting and thoroughly immersed in the work. 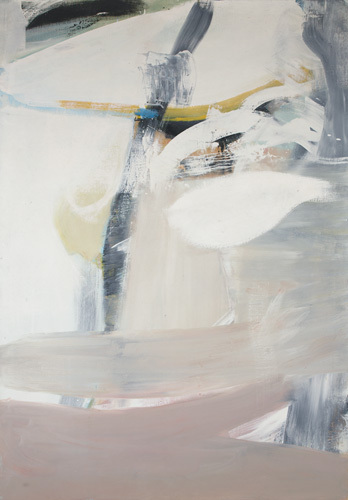 The 1961 painting ‘Drift’ features a characteristic grey streak through its centre which demarcates the flight path Lanyon took as he landed; his paintings are often structured upon these bold flight lines. However, the flight path in ‘Drift’ contrasts with the messiness of the flight lines seen in Lanyon’s earlier efforts in abstraction by appearing to be an expression of a more experienced flier; it is more controlled, and the artist seems to be luxuriating in his increasing confidence as a pilot and artist. In ‘Drift’, Lanyon hoped to allude to the ‘breathless nakedness’ that he experienced when flying, which he undoubtedly conveys in this piece through the sensual manner in which he depicts the Cornish landscape. The painting visually conveys the personal experience of being made to feel intensely human and exposed. His choice of a nacreous colour scheme is evocative of this corporeal rush whilst also capturing the lustre of the clouds. Conspicuous brushstrokes also evoke a sense of being palpably swept through the airspace as we can see the multiple directions the wind was buffeting him in the tension of his brush marks. 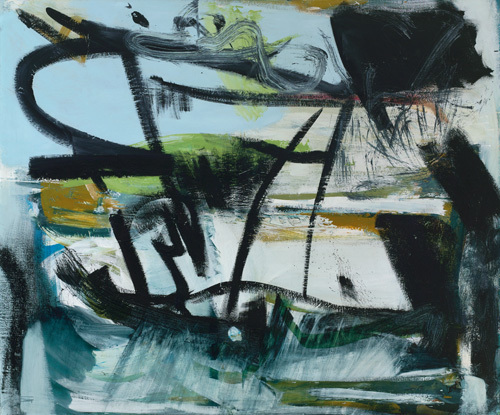 The languid appearance of ‘Drift’ is a departure from Lanyon’s earlier works such as ‘Cross Country’ (1959-60) or ‘Airspace’ (1961). Here wilder brush movements are reflective of the difficulties, and the turbulence Lanyon experienced when he first undertook gliding. In ‘Cross Country’ his navigation path (represented by the black lines) is erratic and expresses the tension between the natural elements, the artist’s frightening human endeavour. 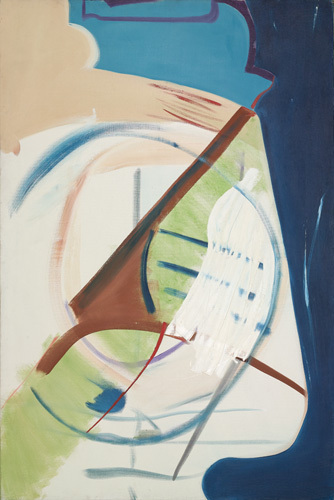 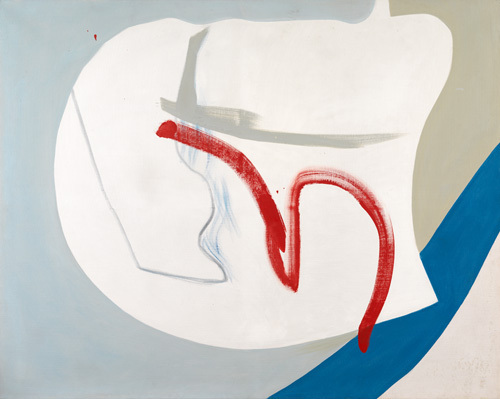 As we move chronologically through the exhibition, landscapes such as ‘North East’ (1963) or ‘Near Cloud’ (1964) are characterised by distinct colours, confident coastal curvatures, and definite outlines. This clarity and precision in Lanyon’s art is reflective of his growing skill and precision as a pilot. ‘Near Cloud’ (1964) exemplifies this, its definite lines and robust shapes express a confidence and lucidity of perception absent in Lanyon’s earlier work. Even the bright red line denoting the artist’s landing path is not incongruous or jarring in relation to ‘Near Cloud’ as a whole. The line’s curvature echoes the shapes and edges of clouds and coastlines seen from above.

Even through an abstraction of this landscape, Lanyon cannot escape its reality – its essential lines as seen from above are echoed in his work. Thus, it is impossible to cast him as a purely abstract painter when the landscapes of Cornwall are ever present in his work.

‘Soaring Flight: Peter Lanyon’s Gliding Paintings’ can be seen at the Courtauld Gallery until the 17 January 2016.