Over five days in Freshers, UCL Film Society created a French New Wave Film from scratch. CALVIN LAW blogs about the process from script to screen.

We start off with a screening of Jean-Luc Godard’s Breathless (1960), a disarmingly small-scale but intriguing feature which pares down the usual film noir conventions, leaving just the gunman and the girl: Michel (Jean-Paul Belmondo), on the run for killing a policeman, and his American girlfriend Patricia (Jean Seberg).

Having seen the other seminal pictures from the French New Wave, The 400 Blows and Hiroshima Mon Amour, it was interesting to contrast these with the more seedy, grimy and yet strangely poetic setting in which Godard places his characters. There is the passion in Breathless’s love scenes that was conveyed in Hiroshima Mon Amour, but here it’s tempered with a hardboiled, criminal edge and a more softly nuanced tone in the film’s light-hearted moments.

The cinematography often lingers upon dark corridors; sunglasses obscure character’s eyes, with blurry puffs of smoke giving a distant vibe to it all. Frequent jump-cuts jerk the movements of characters into a sometimes eerily halting motion and give each specific moment and snapshot of life via camera its own very vibrant little life. In the same vein, Belmondo’s stylised performance does an uncanny physical imitation of Humphrey Bogart’s mannerisms and tics in various scenes, while also grounding it in a setting far removed from Bogie’s Sam Spade and Philip Marlowe’s more colourful stories. 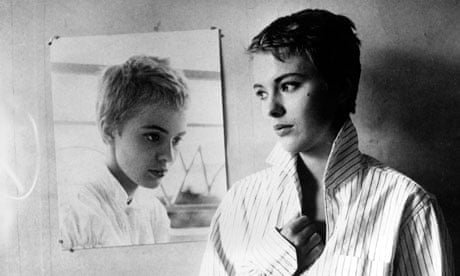 Thursday 15th October: How to Produce a Short Film

On Thursday afternoon, Shaun Waldie’s workshop gave insight into how to produce a film and also a short little interlude on how to produce sound. Describing how a producer must handle countless departments, he remarked upon the utter importance of sorting out catering and food for the production team and actors. He also gave tips on funding, casting (of not just UCL students, but taking advantage of the fact that London is the home of the unemployed actor seeking work for anything), storyboarding before filming (to ensure directors and DPs share the same vision) and how crucial it is for assistant directors to make sure a film is on schedule. He explained all this – including why a slate is needed for filming – with many references to a clear favourite of his, Barry Lyndon (1975).

In terms of sound design, we were taught about the shotgun microphone and how it was employed on a film set, as well as several little tips on how to avoid extraneous noise interference: all incredibly informative, interesting stuff.

On Friday afternoon, more technical treats awaited us in the lighting and cinematography workshop. Amongst many other things, we learnt how to balance different elements and light through the scope of the camera, how we can put into play colour balancing and focus by using different sorts of lenses and cameras, and the different perspectives we view our subjects with.

The French New Wave made for an interesting challenge as it’s a mode of filmmaking that effectively works within limits – this extends to lighting, where different colours of gel, and inflections and reflections of light, can convey entirely different senses of place and atmosphere.

Saturday was the big day: lights, camera, action – or rather a fair bit of hustling about as everyone was divided up into their different roles. We were to stay true to the look of the 1950/60’s French New Wave in all respects: camerawork, lighting, costumes, acting, sound, and so forth. I learnt an awful lot both by watching everyone mulling over each detail preceding even the set-up of the sets – from trying out equipment to chatting about how they would shoot scenes – and by popping in and out of the scattered conversations taking part amongst crew and actors.

The film was to centre around the incredibly ‘new-wavy’ lives of Elle and Lui, who are in the script described as ‘doing typical New Wave things’ and ‘the perfect New Wave man’. In a nutshell, they bump into each other, and cue attraction. It’s not simple ‘meet-cute’ though, far from it – the conversation takes a darker turn as truths about Lui’s inner nature are revealed…

Anyway, enough about the plot. The main preoccupation of all on set was to adhere to the filmmaking formulae of French New Wave. We first went to the Pi Media Office where we spent time filming in a little office, using the tightly-packed surroundings, as well as meticulous sound, lighting and direction, to convey a palatable sense of sexual tension between the actors. I was particularly interested in the little variations with each take: a different perspective, a different delivery by the actors, a different way in which the lights reflected upon the actors, shadowy or bright.

Some exterior shooting was undertaken on Saturday by the Church of Christ the King on Gordon Square. In-between shoots I had a chance to speak to the incredibly passionate and hard-working personnel on set: astute in matters of film and with so much to say about the likes of the craft (or lack thereof) of Michael Bay, differing views on American Psycho (and a fantastic impression of Patrick Bateman by our leading man, Alexei), and the extent to which we were paying homage to, or poking fun at, the tropes of the French New Wave genre.

Shooting concluded outside the Print Room Café where — excitement, excitement! — I got a walk-on role as an extra in the background of one of the shots. This was largely by merit of my mobile phone, which was employed as a prop to convey a sense of modernity in contrast with the anachronistic quirkiness of our leading man and lady. A coat and jacket motif thrown into the fray added even more to the surreal feel to the proceedings. Once the cry for ‘it’s a wrap!’ came along, I really felt like I’d stepped in and out of a very distinct little world created by some fantastic work, by fantastic individuals.

You can read more of Calvin’s work here.

UCL Film Society will be showing their French New Wave film in the coming weeks. You can find out more about getting involved in Film Society here.