Beaded curtains, mirrors, translucent columns, and shining stainless steel orbs: these are the forms that inhabit Space Shifters. The Hayward Gallery’s recent group exhibition consists of a haphazard circus of repurposed objects. Unified by refined curatorial work, the artworks challenge preconceived notions of form and identity. Featuring 20 artists, almost all of the pieces in this exhibition relate to two major American art movements in the 1960s known as ‘Optical Art’ (or ‘Op Art’), and the Los Angeles-based era of art production, ‘West-Coast Minimalism.’ Artworks from these movements often explore ways of capturing objectivity. Space is warped to subvert the artist’s presence. This manipulation of form and space produces an ambiguity of shape that ultimately gives the viewer the agency to conceive and interpret the artwork. 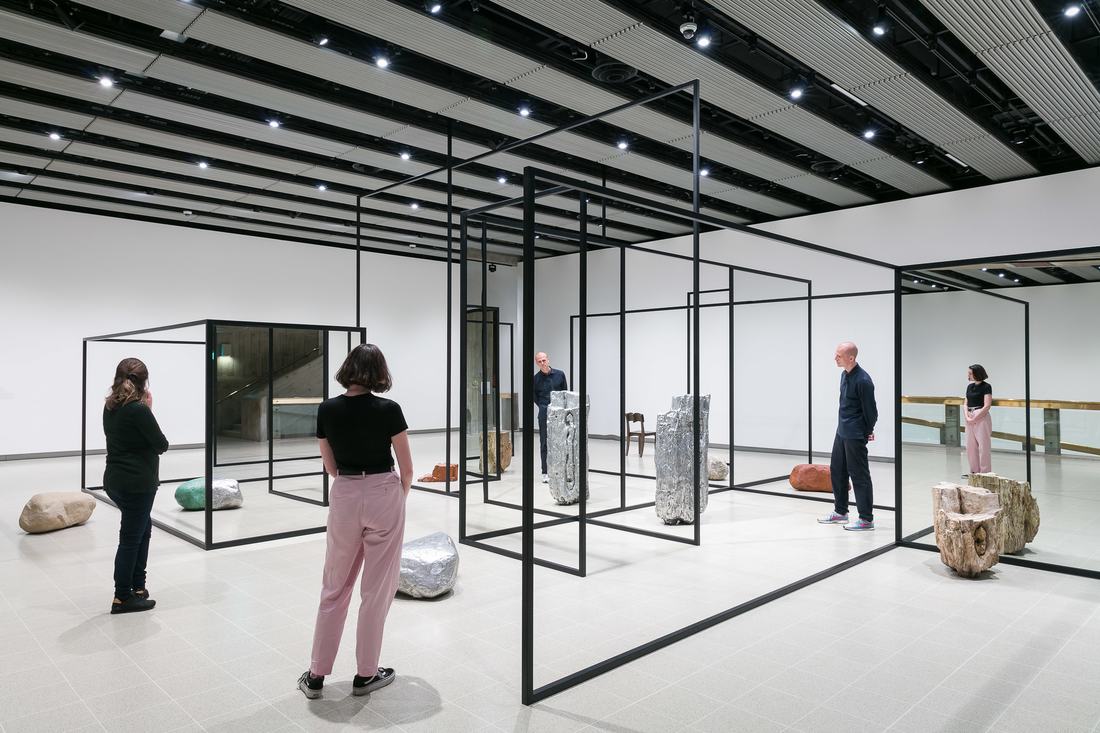 The exhibition spaces are constructed to transform the physical art object into an immersive experience. Objects within these exhibitions are configured to displace barriers between the artwork and the viewer. This technique involves a careful deconstruction of the basic physical components of the artwork. The artist places the anatomised object in a calculated way that completely surrounds the viewer. Closely associated with the Los Angeles-based art movement ‘West Coast Minimalism’, this spatial method plays with the viewer’s senses. It produces structures that attempt to alter the viewer’s perception of space. This is exemplified in Alicja Kwade’s WeltenLinie. Constructed within the room is a frame of double-sided mirrors and transparent glass with objects on the ground. As viewers walk through this labyrinth, each turn leads to a surprise: images of common objects such as stones and blocks of wood appear at times as optical illusions, at other times, the real objects seem to materialise out of thin air. The reflected object, and the image it produces, transforms as the viewer moves through the labyrinth. This metamorphosis is emphasised because the viewer is constantly observing the objects at various angles, which changes the experience of each artwork. By allowing viewers to move through the framed spaces in the artwork, Kwande gives them agency and responsibility to construct their own unique perceptions.

Throughout Space Shifters, the viewer’s presence is amplified, radically changing the usual dynamic between the viewer and the art. The art seems to become inherently tied to the viewer’s experience and because of this, it was interesting to see how viewers respond differently to being made the focal point of the art that they are used to admiring from a distance. I watched as some took it as an opportunity to cultivate their Instagram. For example, one fashionably dressed woman, rather ironically, chose to take her selfies with the Kusama exhibit titled Narcissus Garden. Others among the crowd of viewers were calling the exhibition ‘impersonal’ or ‘too experimental’, reminding me of how unique each viewer’s experience of the installation really is. 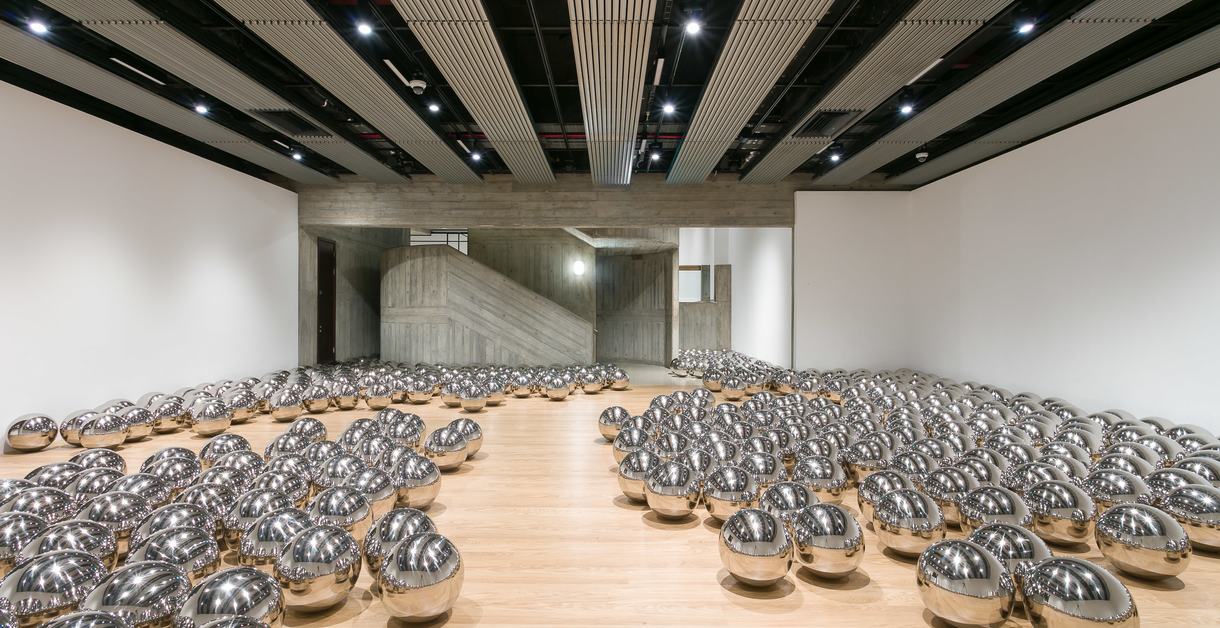 Reflections are a major aspect of the exhibition. The word itself is derived from the Latin mirari, which means ‘to look at, to wonder at.’ When a baby wonders at his or her reflection in the mirror for the very first time, an internal transformation is said to occur. This change is psychoanalyst Jacques Lacan’s theory of the ‘mirror stage’, which is described as the moment that humans begin to realise their ‘selves’ exist separately from the world. The realisation of the ‘self’ is a violent process of internal change that splits one’s viewpoint of the world into two. Internal chaos of conflicting desires, fears and hopes of the child merge into a construction of ‘self,’ while everything else becomes the ‘other.’ By the time we are adults, we become used to looking at ourselves in the mirror. We are familiar with our own features, our own facial expressions. Our identity solidifies as we study our own images in reflective objects. 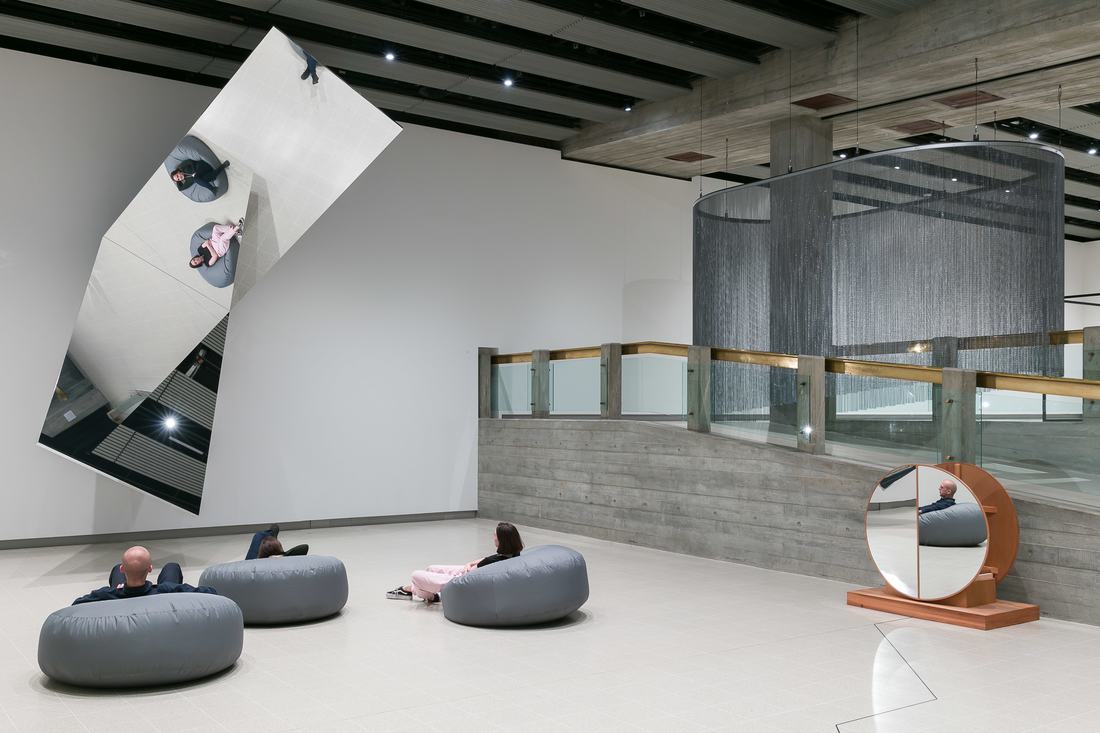 In Space Shifters, this carefully cultivated image of self is deconstructed and made fluid, especially in the case of Jeppe Hein’s 360-degree Illusion V. The installation consists of a set of colossal, revolving mirrors. Perfectly angled such that the image of the viewer bounces from pane to pane, the mirrors reflect the gallery and its inhabitants. Here, the viewer’s image is reproduced in the mirror’s reflection, rendering their bodily identities a part of the object. They become a part of the artwork’s identity because their own image manifests within the artwork. It is this image-object dichotomy that attempts to distort the construct of ‘self’ in the viewer’s identity. As the viewer struggles to locate where their constructions of selves exist, they are confronted with existential questions: does the constructions of ‘self’ exist as images within this object, the mirror? Or do bodies exist as objects that portray an image? As viewers become unsure of themselves, the construct of their ego, body, and image of self is destabilised.

If 360-degree Illusion V disorientates and confuses the viewer, De Wain Valentine’s Gray Column resolves the issue of identity by drawing parallels between the individual’s exterior and interior. On the surface, the work is a unified whole: a sleek triangular prism formed from cooled industrial plastic resin. Look at it closer, and one may perceive that Gray Column’s flawless surface forms a semi-permeable barrier, developing Gray Column into a visual metaphor about the fluidity of identity. When a viewer is reflected on the surface of the artwork, a version of themselves also exists within, throughout, and outside Gray Column. The object captures this simultaneous reflection of the viewer’s self by being both reflective and translucent. Identity is not constrained by physical appearance or by a limited conception of the conscious mind; it is wild, chaotic, and idiosyncratic.

Ideas of objectivity are questioned in Space Shifters through the multiplicity of perceptions. Each viewer’s unique experiences and interpretations of the installations redefine what the artwork is individually. Here, viewers are given the power to understand the artworks in their own way. Our constructs of identity are questioned, and we contemplate where we ultimately lie within the mirrors presented to us.

Space Shifters at The Southbank Centre’s Hayward Gallery is on exhibition from 26th September 2018 to 6th January 2019.