Kay Ean Leong explores the enduring impact of Cristobal Balenciaga through the lens of the V&A’s current exhibition.

What is so striking about the Victoria and Albert’s current fashion exhibition is its unexpected modernity. With surrealist hats, balloon hems and cocktail dresses redolent of origami, Cristobal Balenciaga’s oeuvre is filled with silhouettes which provide a counterpoint to the hourglass figures associated with the post-war era, in which the couturier flourished. Showcasing a plethora of pieces, the retrospective exhibition confirms that he indeed ‘laid the foundations of modernity’ – accolades sung of him by his protégé Emanuel Ungaro. The exhibition is split over two floors: the ground floor focuses on Balenciaga’s mastery of fabric and form, innovative spirit and attention to detail, whilst the upper floor centers on his legacy and influence upon subsequent designers.

Born in 1895 in Getaria, a Basque fishing village, Balenciaga was exposed to fashion from a young age – his mother was a seamstress. By aged 12, he was a tailor’s apprentice in San Sebastian; 10 years later, he opened his first boutique there. The Spanish Civil War was the impetus he needed to close his stores in Spain and move to Paris, and in 1937, he unveiled his couture house on the highly prestigious Avenue George V. He was also devout Catholic and a Spanish royalist, aspects of his personality that would come to inform the aesthetic of his work. During his heyday in the postwar period, he dressed socialite clients such as Pauline de Rothschild and Mona von Bismarck. He had an elusive personality, seldom speaking to media, and was extremely selective with the clients he chose to serve – the salon was notoriously hard to enter, with aspiring clients repeatedly being turned away. The acclaimed couture house closed upon his retirement in 1968, marking the end of an era. The brand has since been rejuvenated, becoming a household name for all fashion mavens under the creative direction of Nicholas Ghesquière from 1997-2012 (now at Louis Vuitton) and recently, under the aesthetic vision of Demna Gvasalia (of Vetements fame). 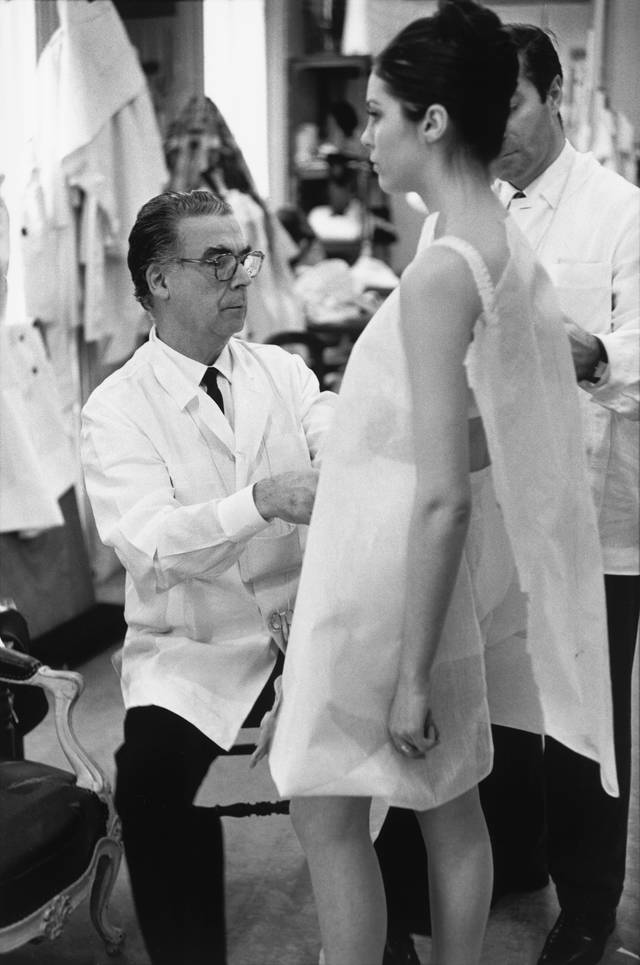 A photograph of Balenciaga working, by Henri Cartier-Bresson, 1968; image courtesy of the V&A

The first floor of the exhibition highlights Balenciaga’s artistry. His background in tailoring set him apart from other couturiers, in that he was highly involved in all parts of the production process. From designing, cutting and tailoring to dressmaking, Balenciaga was a perfectionist through and through, carrying out multiple alterations until each piece met his standard. He only used custom mannequins, made to the exact proportion of the person he was making the garment for – an example of his attention to detail. This rigour has perhaps been lost in our time, especially with the current ‘see now, buy now’ model which produces clothes fresh off the runway – a result of the rapid pace of the 21st century fashion world.

Like a fashion engineer, Balenciaga manipulated materials during his creative process, unlike more conventional couturiers who began by sketching. His obsession with form and using appropriate fabrics resulted in pieces that made the most of material, and that were architectural and abstract. Case in point: the ‘envelop dress’ on the exhibition’s promotional poster is made of stiff yet lightweight silk gazar that can effectively maintain shape and volume. A dress so dramatically (and impractically) sculptural, only two were sold – and one was returned because its wearer could not use the bathroom! Nonetheless, it is a testament to Balenciaga’s intimate knowledge of fabric behaviour and his precise technique. X-ray images of other garments –  specially commissioned for the V&A show – demonstrate how he ingeniously experimented with invisible weights and hidden layers to ensure that his garments would fall beautifully. 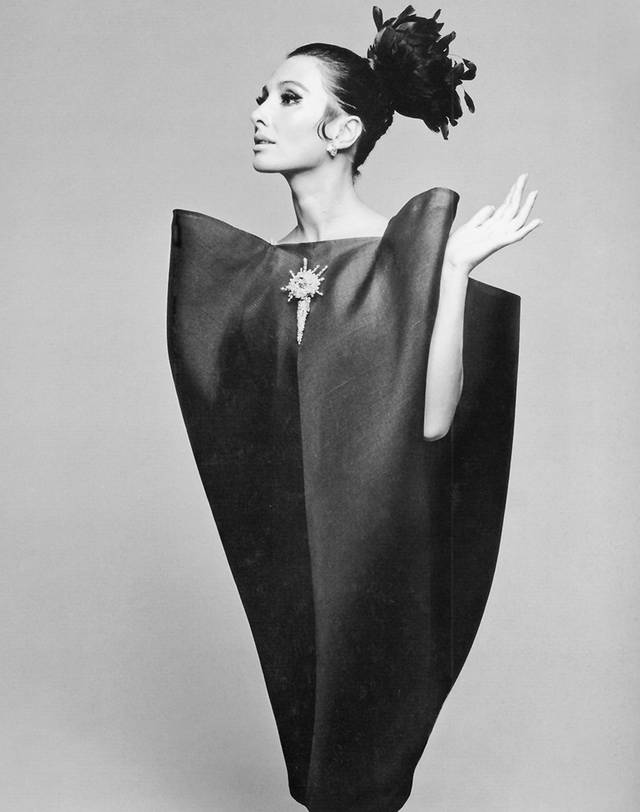 A photograph of Alberta Tiburzi in Balenciaga’s ‘envelop dress’ by Hiro Wakabayashi for Harper’s Bazaar, June 1967; image courtesy of the V&A

On the second floor, one is greeted by two mannequins dressed in checked suits – one by Balenciaga and one by Gvaslia. Gvaslia’s is nipped at the waist and has exaggerated hips, an ode to the unusually-contoured garments constructed by his predecessor. Almost in conversation with one another, the mannequins, along with the others on this floor, accentuate just how timeless Balenciaga’s ethos is. Designers have continued in his tradition by echoing and negotiating with the principles that were central to his ethos: minimalism, new materials, innovative pattern-cutting, perfectionism and shape and volume. Balenciaga’s billowy silhouettes are reflected in the poufy tulle dresses of Molly Goddard; his unusual shapes that frame the body rather than restrict it are paralleled in the designs of Hussein Chalayan. His openness to try new materials is seen in the works of Issey Miyake, known for his innovative pleating, or in Iris Van Herpen, who constantly seeks to create new materials. In fact, the satin bubble minidresses just sent down the runway by Anthony Vacarello at Yves Saint Laurent during the recent Paris Fashion Week in September are reminiscent of Balenciaga. Even today, his impact has endured. 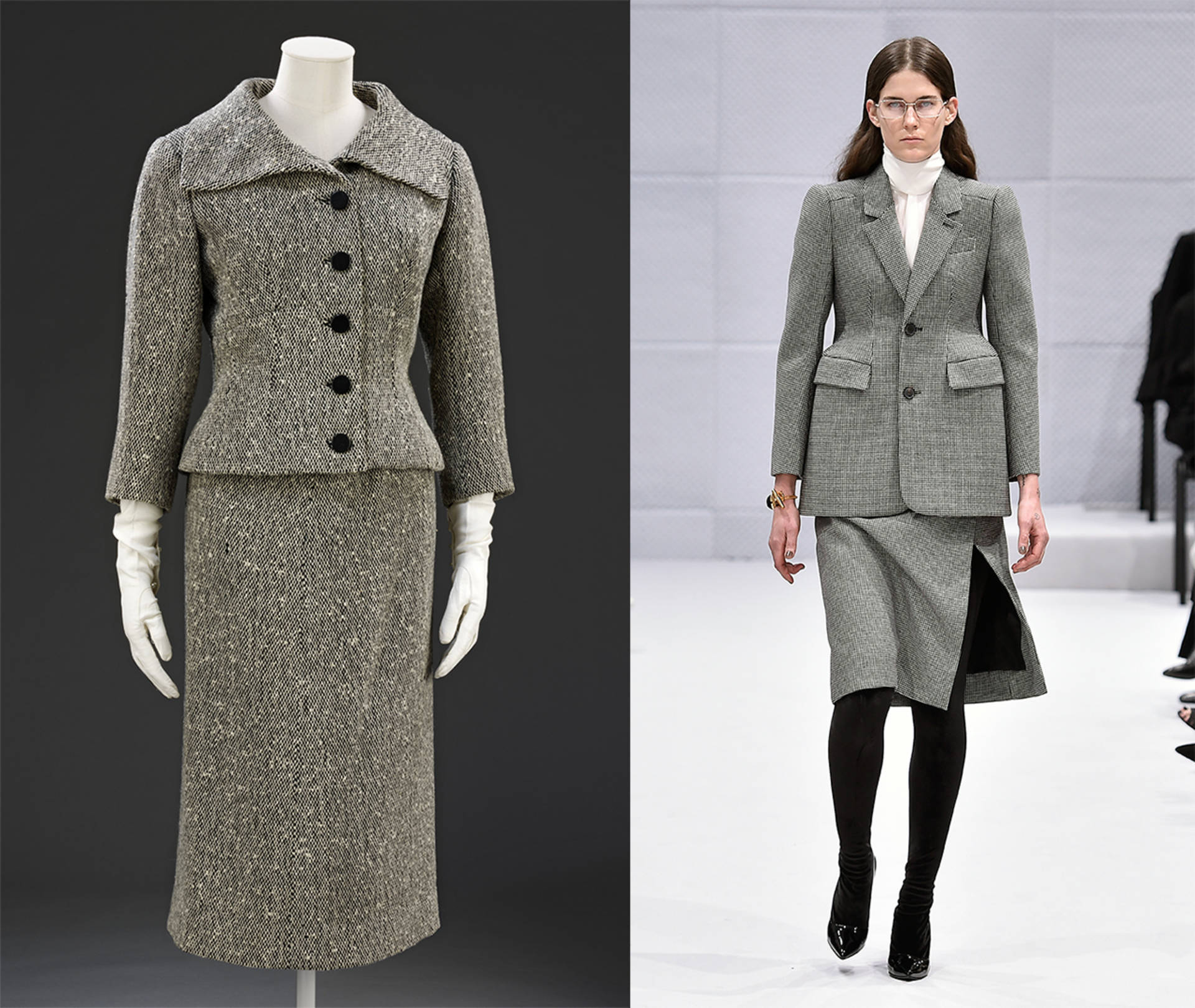 ‘Haute couture is like an orchestra whose conductor is Balenciaga. The other couturiers are the musicians and we follow the direction he gives’ – Christian Dior

Balenciaga is a visionary and maestro of fashion; his legacy is palpable in many others after him. As a whole, the exhibition, while small compared to similar ongoing retrospective exhibitions (such as ‘Christian Dior: Couturier du Reve’ in Paris’ Musée des Arts Décoratifs), succeeds in convincing us of Balenciaga’s mastery. It then begs the question: does our time have another Cristobal Balenciaga? Potential candidates worthy of this epithet include Comme Des Garcons’ Rei Kawakubo, or Chanel’s Karl Lagerfeld, both of whom have been revolutionizing forces in the industry. Perhaps even Gvasalia can be cited in the same vein. His recent shows at Balenciaga and his own brand Vetements have been met with critical acclaim, with fashion editors hailing his subversive street style.

However, only time will tell if these designers will match the legacy of the maison’s founder. For now though, despite the fleeting nature of seasonal trends and all consuming appetite for ‘fast fashions’, it is safe to say that the revolutionary visions of Cristobal Balenciaga are not going to be forgotten anytime soon.

‘Balenciaga: Shaping Fashion’ is on until Sunday, February 18, 2018 at the Victoria and Albert.